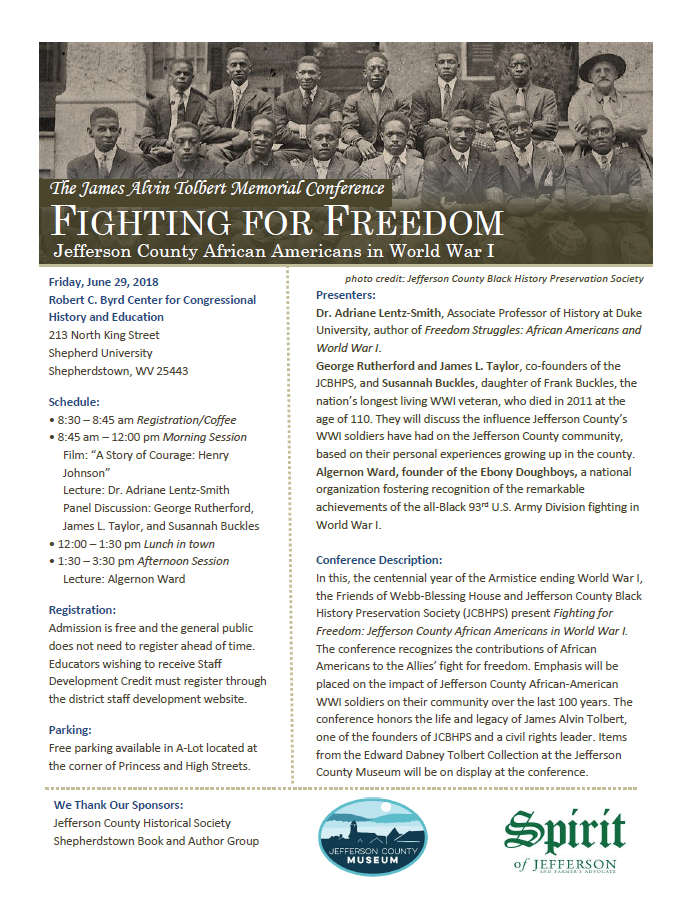 In this, the centennial year of the Armistice ending World War I, the Friends of Webb-Blessing…

Guest speakers
Dr. Adriane Lentz-Smith, Associate Professor of History at Duke University, author of Freedom Struggles: African Americans and World War I;
Algernon Ward, founder of the Ebony Doughboys, a national organization fostering recognition of the remarkable achievements of the all-Black 93rd U.S. Army Division fighting in World War I;
George Rutherford and James L. Taylor, co-founders of the JCBHPS, and Susannah Buckles, daughter of Frank Buckles, the nation’s longest living WWI veteran, who died in 2011 at the age of 110. They will discuss the influence Jefferson County’s WWI soldiers has had on the Jefferson County community, based on their personal experiences growing up in the county.

Schedule (one may attend either or both sessions)
Morning Session (8:45 – 12): The day opens with the viewing of a short film, “A Story of Courage, Henry Johnson,” first aired on PBS. The film highlights the achievements of the all-black Army regiments during WWI, with emphasis on the heroism of Medal of Honor and Crosse de Guerre recipient Henry Johnson. Dr. Lentz-Smith will next present an overview of the significant contributions of African-American soldiers to WWI and their reception at home. After a short break, a panel discussion will follow, comprised of George Rutherford, James L. Taylor and Susannah Buckles, who will discuss the influence of Jefferson County WWI veterans on their lives and others living in Jefferson County and take questions from the audience. Dr. Lentz-Smith will be signing her book at the end of the morning session and shortly before the beginning of the afternoon session. We encourage you to buy a copy and show your support.

Afternoon session: (1:30 to 3:30): Presentation by WWI scholar and reenactor Algernon Ward, highlighting the achievements of the African-American 369th Infantry Regiment (Harlem Hellfighters) of the 93rd U.S. Army Division, including those of Storer College students/graduates who were members of the same division as the 369th Regiment’s. He will also highlight key American events adversely affecting the civil rights of African-Americans at the time of WWI.

Registration: None required for general public. Staff development credit (6 hours) provided by the Jefferson County School System to its educators. Educators may register on the district’s staff development website.